The ringers at St Michael’s church are a friendly band. We’re always keen to hear from new ringers, so if you can already ring and are looking for a new tower, if you are a lapsed ringer who wants to start ringing again, or if you have no experience but you are interested in learning to ring, why not come along?

We ring for service at 8.55am every Sunday and for evensong at 4.25pm usually on the fourth Sunday of the month. We also ring for weddings (for which we get paid!), as well as the occasional funeral and for other church events.

Our weekly adult practice night is on Wednesday evening from 8pm until 9.15pm. Junior ringing (ages nine and up) is held on Saturday mornings.

We aim to make our practices varied and interesting for all who attend and, depending on the availability of personnel, ring a selection of methods from Plain Bob to Surprise Major.

If you are a new ringer, don’t be put off by the weight of the bells – the ability to control them is more down to technique than sheer strength.

You will also find that ringers have a language all of their own but you will soon get the hang of it. Some expressions you hear in everyday conversation have their origins in ringing, such as “go like the clappers” or “ringing the changes” and you’ll be able to find out what they really mean!

Bellringers don’t use music but if you come along, you can find out what the diagram below is all about.

The oldest bells in the tower date back more than two hundred and seventy years, and two others to the time of Queen Victoria’s Diamond Jubilee. The church is close to St Michael’s village and to the site of Roman Verulamium, the oldest part of St Albans. The pub closest to the church, in nearby St Michael’s Street, has been called The Six Bells since at least 1786, and The Bell for more than two centuries before that, testament to the long tradition of ringing at St Michael’s.

After many years as a ring of six, two new, lighter, bells were added in 1953 to make up the ring of eight we have today. (The pub name remains unchanged!) 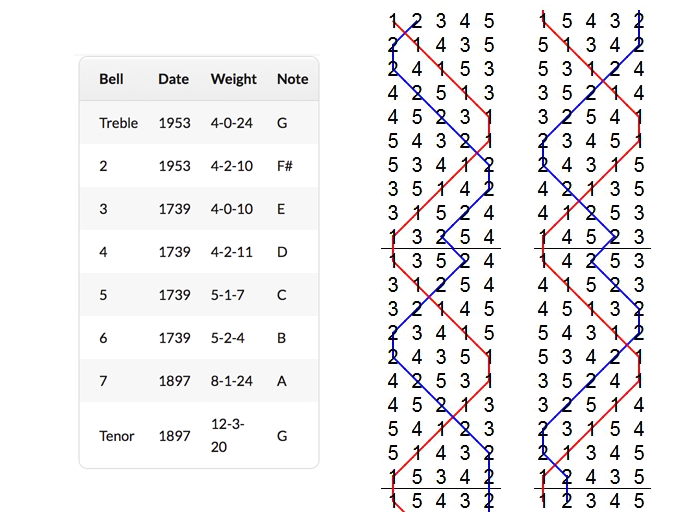 In the spring of 2009, the bells were comprehensively refurbished by the Whitechapel Bell Foundry, making them both easier to ring and more audible than before.

For further information about ringing at St Michael’s, please contact: